In football bad boys are common, but the true pariah is rare. Perhaps for that reason, poured over ice with a sweet twist of schadenfreude, I’ve always rooted for The Villain, whenever destiny wills him to appear. 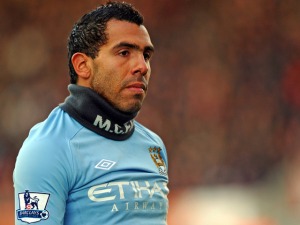 Enter Carlos Tevez. Known as “El Apache,” the diminutive facially-scarred juggernaut first made headlines within the villainy context upon his highly publicized knife-to-the-back transfer from Manchester United to cross town rivals Manchester City in 2009. Following his lethal form for City in 2009-10, Tevez, that season’s Etihad Player of the Year and Player’s Player of the Year, was promoted to Team Captain by enamored coach Roberto Mancini. Despite this honor Tevez requested yet another transfer, and before the 2011 season began he was unceremoniously stripped of the Captain’s armband after giving an interview on Argentine television over the summer in which he stated unequivocally that he “would never return to Manchester, not even on vacation.” When a last-minute deal with Corinthians proved impossible Tevez did indeed extricate his foot from his mandibles and returned to City, but found first-team playing time limited due to the excellent form of the strikers brought in to replace the pouting Argentine when he looked set to abandon the club only weeks earlier.

The tension came to a head on September 27, 2011 when, in a crucial Champion’s League match at Bayern Munich and City losing 2-0, Tevez shockingly refused to come on as a substitute in the second half to help his side – simultaneously enraging not only his coach, teammates and Man City fans, but also any human being not being paid £250,000 a week to play a silly game with a ball. His career at Manchester City declared finished by his once-glowing manager, suspended from the team and forced to train in isolation, and having lost at least £500,000 in fines for his act of defiance, Tevez is not content to quietly await the January transfer window and hope that another top club will be willing to pay Man City’s zillionaire Arab owners their ridiculously expensive asking price and rescue him from non-playing purgatory. Not Carlos. This week ol’ boy decided that he’ll spend his newfound free-time figuring out a way to sue Mancini for defamation of character. Well-played, indeed. For this nipple-twist to an already absorbing tragedy, we salute you, Carlos Tevez. 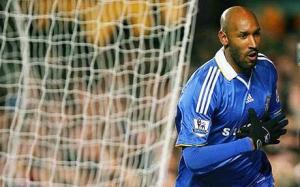 This preoccupation with The Villain began back in 1999-2000 with then young Nicolas Anelka’s ill-fated and one-off spell at Real Madrid. After winning the PFA Young Player of the Year Award, Real snatched 19 year-old Anelka from Arsenal for what was then the highest transfer fee ever recorded (£22.3 million) and the curse was set in motion. Turns out Nico was under the impression that if Real shelled out so many ducats for him then logically the offense should then change to revolve around him, and his open petulance and frustration went over with the team and fans like the proverbial turd in the pool. Our hero quickly decided that the best and most logical course of action would be to refuse to train, for which he promptly received a 45-day suspension from the club. Not content to piss off just his teammates, coach and every fan of Real Madrid, Anelka saw to it to quickly up the ante to the point of the surreal. To avoid the press Nicolas had his brother smuggle him to Barajas airport in the trunk of his car, flew back to France and hastily gave an interview to the French press in which he vowed never to return to Spain and launched into a tirade about everything he hated not only about Real Madrid but about Spain and Spaniards in general. I, of course, immediately bought a Real Madrid Nicolas Anelka jersey, #19.

When the coach of the French National Team declared that Anelka would never play for his country again if he kept this up, Nico was forced, like Tevez, to return to Madrid and apologize to the coach, the team and the entire nation. He eventually proved instrumental in Real’s Champion’s League title that season, sinking Bayern Munich with 2 brilliant goals in the semifinals. After an epoch as a footballing journeyman and labeled by the British press as “The Incredible Sulk,” Anelka has since matured into a wisened and contented top-notch goal-scorer, quietly producing world class seasons since 2008 for Chelsea. He remains unafraid to turn things up a notch when he sees fit though: to my delight it was Anelka who rightfully told French National Team coach Raymond Domenech to “Go fuck himself” at the 2010 World Cup in South Africa. Anelka was immediately sent home, sparking a well-publicized open refusal to train by the team, captured and broadcast live on International TV. Anelka then refused to publicly apologize when asked to by the head of the FFF and declined to appear at his disciplinary hearing. He then received an 18-match ban on International play, which Anelka responded to, in his words, by “Dying with laughter.” That’s my man right there.

Everybody loves Robbie Fowler – as well they should. This working class hero has not only had a remarkable and entertaining football career, but in 1999 he decided to dip his toes into the pool of potential pariah-dom when he celebrated his goal versus Everton by “snorting” the end line as if it were a line of cocaine. For that piece of beautiful jackassery, which saw him heavily fined and banned for four matches, we give credit where credit is due, Robbie.

One to watch: Mario Balotelli

Mario Balotelli’s got amazing talent and isn’t afraid to wear a cross-town rival’s jersey in a television interview. Or openly not try against a shyte American football side and be booed off the field. Or set his house on fire by lighting fireworks inside it. There’s a lot of villainous potential here people – take note!

5 thoughts on “The Villain”