Greetings! Back in the day I spent time in the west coast land of San Diego as a roustabout record slinger at the now defunct Tower Records, eating mad Nico’s burritos and Tijuana bacon-weenies after Bad Brains shows across the border. At the time I worked with a young and aspiring MC now named Unite, who is busy CRUSHING the scene with the absolutely unfuckwithable Tribe of Kings Sound System – that is, when he’s not touring coast to coast with the likes of Snoop Dogg and Sly and Robbie. I finally had the chance to catch up with the man and get his story. So sit back and check out the interview and the ill tunes – DJ UNITE and the Tribe of Kings Sound System at the controls tonight! RIDDIM!

Disko Baloba: Whats up my man?! So you gotta bring me up to speed! Last time we were hanging out you were crate-digging and driving that sweet old caddy. Now you’re killing it with what seems like a million projects in the works!

DB: LOVE IT. So when did things start kicking into gear with you and your career?

DJ UNITE: I started doing Hip Hop right before I turned 21, and that got me into the whole performance thing. I was in a Hip-Hop group locally called Roundtable MCs.

DB: Tell me about that – and then how did that grow?

DJ UNITE: My DJ Mike Czech was unknowingly teaching me how to DJ. We started making a few waves with that,  got linked up with Osiris skate shoes and went on my first tour. I got to rap in NYC for the first time that was sick.

DB: So what year was that?

DJ UNITE: 2000 I think. The Aftermath Tour. We all got on a Greyhound type bus and went across the country and back. Hit like 5 dates. It was kind of ridiculous. That kind broke our group though cuz the other frontman kind of fell off by the time we made it back to the West and he disappeared.

DJ UNITE: That tour was hard. But like the last couple tours I went on with Slightly Stoopid it was easy. And Fun. Having a sleeper bus, 3 catered meals, money. I kind of stopped rapping serious after that. I was already in a reggae sound system at that point: Tribe Of Kings. DJing became a way to make money for me.

DB: Oh so Tribe of Kings goes way back then?

DB: Word. Tell me about Tribe of Kings.

DJ UNITE: We been basically molding our style around sound systems from Jamaica since the beginning. We’ve had people come and go. At this point there is 5 of us, and we have been doing every single Sunday Night since we started in 97. We sound clash, have tons of Dub Plates, and have been doing different internet radio things for awhile now too.

DB: Same spot on Sundays or all over? And how can I get my hands on your DUBS?!

DJ UNITE: Sundays… we’ve been moving from spot to spot after a couple years. Dubs… Those are kinda of like our weapons. We have them scattered about on some mixes, but we don’t give them out really. We still sound clash so it’s better to keep our opponents guessing what we have in our box.

DB: Killer. I love that you guys keep it real on the roots and sound system culture.

DJ UNITE: Honestly, I was kind of ahead of the game on a lot of my crew cuz I worked at Tower with you guys. Andy put me onto mad reggae. I had to kind of learn after that on my own, but got a good jump off point.

DB: Dude Tower was like a PhD in roots and culture!

DJ UNITE: Yeah for real!!! Playing Reggae seems like it would be easy, but when you get into hardcore dancehall things, it can be rough.

DB: No dude – sound system culture don’t fuck around! But let me hear it from you: how is it rough?

DJ UNITE: Well, one of the reasons we’ve had to move a couple times was cuz of shootings at our spots. In San Diego, as you know, Reggae is big, and everyone from Hippies to Gangsters have Reggae and ganja in common. There’s always someone gunning for your DJ position as well… When Jamaicans first hear about us, they’re kind of like “What do these White Boys know about Reggae” but then the proof ends up in the pudding y’know.

DB: I always knew about Eek A Mouse, but never came in contact with any other Jamaicans in SD. Is there a big population there?

DJ UNITE: No there’s not. Not like NYC let’s say, or even LA.

DJ UNITE: But Reggae in Beach Town goes hand in hand. Same way on Islands like Hawaii and Guam

DJ UNITE: Since I come from a Hip-Hop upbringing, I feel like I have an advantage next to a lot of folks that don’t know or care about turntable techniques and shit.

DB: So how did you get in with Slightly Stoopid?

DJ UNITE: I went to High School with Kyle and Miles, the lead singers. I used to walk to school with their Tour Manager, and we eventually hooked up down the road.

DB: So when you work with those guys are you DJing between sets or are you part of the band on stage?

DJ UNITE: No between sets – I pretty much just get to do me.

DJ UNITE: I got to tour with Them and Snoop, Stephen Marley, Cypress Hill, Colle Budds, SLY AND MOTHERFUCKING ROBBIE. It was fun as hell.

DB: Dude that’s INSANE. Tell me a little about that!

DJ UNITE: The first tour was with Stoopid, Pepper, and Sly & Robbie. Sly & Robbie’s front of house engineer is this guy named Bulby who is a legendary Dancehall producer… First gig I did with them, I was playing this Riddim called the “Midnight” riddim, and he comes up to me and is like “Yo… You know I made that right…” Shit was mind blowing. And that was the first 3 days. I got to see them every day. Got to hang with them and pick their brains every night.

DB: Another PhD in the pocket!

DJ UNITE: After that summer I toured the next summer with Stoopid, Snoop, Stephen Marley (who brought Spragga Benz and Julian Marley also), and Mickey Avalon. Crazy line-up. I didn’t even meet Snoop. He was with these crazy Nation of Islam security that I wasn’t feeling like dealing with. Coolest part of it all was seeing the country. I got to play at INSANE places like Red Rocks in Colorado, Roseland Ballroom in NYC, The Gorge in Washington, Stone Pony in New Jersey, Penns Landing in Philly, which is always the BUCKEST show. The last tour I did was actually a 311 tour with Stoopid on the bill. I stayed home in San Diego last summer for the first time in 6 years, and put together a studio.

DJ UNITE: North Park. It’s not high end studio in the least but keeping the DIY ethic we made it happen. 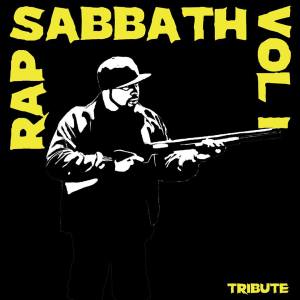 DB: Tell me about your hip hop vs metal project. Rap Sabbath?

DJ UNITE: Hahaa! Basically… My dude Ready was security on the road with us a couple years and me and him really hit it off. He’s this roughneck dude from the projects in Chicago. He moved out to San Diego and I told him he had a DJ whenever he needed it. So I been doing some shows with him. He would tell me stories about sitting in the projects drinking coffee outside his pad, blaring Black Sabbath, and fools would trip out on him. I had always been into juggling doubles of Black Sabbath, and even implemented that kind of stuff into my rap set back in the day, so it was like a giant light bulb lit up.

DB: Do you mind if I embed a couple of your joints for people to stream? They won’t be able to download. Like one from Sonido de la Frontera and one from Rap Sabbath? Just to give them a taste? A little sugar.

DJ UNITE: Yeah… You can put Rap Sabbath for free download cuz we can’t really sell it y’know. We did it with full intentions of showing them utmost respect, so we can in good conscience sell it. I wonder if they will ever get to hear it, and whether they will hate it or not.

DB: And what about Sonido de la Frontera?

DJ UNITE: Sonido is interesting. I started doing Mexican parties with homie back before I could even mix. We would bring his uncle’s record COFFIN out and we’d rock these weddings, or birthdays or whatever. That got me into learning about Cumbia. Eventually that came back around because I would be DJing with this group called the B-Side Players out here in SD, and I would tell them I collected Cumbia records too… Once again fools would trip cuz here’s this White dude playing straight Latin music.

DJ UNITE: Eventually I got Karlos, the singer from B-Side, and Mr Henshaw, one of the producers from my Crew (I say crew and I know it sounds confusing, but this like my crew crew called First Power). I kind of had to teach Mr Henshaw about Cumbia, and it was an infusion of Hip-Hop styled production (Samples, MPC2000) mixed with Cumbia Riddims. 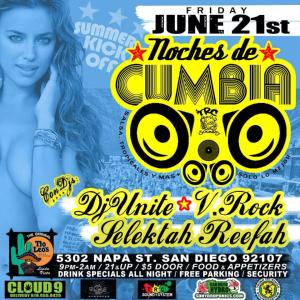 DJ UNITE: Thanks man. We worked hard on it. It’s been done for awhile, but we were bent on putting it out on vinyl. When we play live, I play the beats on the turntables, Mr Henshaw plays the solos and some sounds on the MPC, and Karlos Paez plays Trumpet and sings.

DJ UNITE: Cool. I got my god daughters graduation in a few.

DB: OK so here’s the big question: how would you feel about me allowing fools to stream a Tribe of Kings riddim transmission through the website. I mean, your projects are sick and interesting, but I feel like if I don’t give them a taste of your reggae prowess….

DJ UNITE: Yeah for sure. Anything you want to stream helps us promo.

DB: Oh man this is gonna be ILL.

DJ UNITE: Yeah for sure!

DB: Awesome. Dude it’s been great catching up. Proud of you brother! Living it!

DJ UNITE: No sweat. Big Up!

More photos and information at: http://tribeofkings.wordpress.com/